I actually had a dream this weekend regarding the International LeatherSIR contest:


I dreamt that the contestants, their producers, and the contest staff were gathered together to draw numbers for contestant placement — who would go first, second, etc.  Weird thing #1: we were on the patio at the Cuff (in Seattle), not in San Francisco.

The regional producers drew the numbers rather than the contestants.  Weird thing #2: drawing for the Northwest Region were Mike Daggs and Jeff Henness (neither of who have been involved with LeatherSIR, other than when Mike’s other half Kelley was Community Bootblack).

Mike drew #1, and Jeff drew #25, which in the dream was the last placement, despite there being 16 regions and thus there would be 32 numbers drawn.  (And that leaves out the Community Bootblacks completely.)

I chose to take #25, leaving #1 for Northwest Leatherboy Danny, saying “No way in Hell do I want to go first!”

There is statistical truth to my dream preference.  When there is a large field of contestants, there is a judging bias that favors those who compete later in the order — this can be seen in competitions ranging from International Mr. Leather to Olympic figure skating.  (Taking IML as an example, they winnow 50+ contestants down to the Top 20 for the final portion of the contest.  The first half of the contestants are typically about a quarter of the final 20.)  Part of this is that no matter how good an early contestant is, the judges feel restrained from giving too high of marks, because they have to leave open the possibility that later contestants will be even better.  Another factor is just weariness: there is a tendency to relax the tightness of scoring as each contestant blurs into the next.

I don’t have any data about whether the scoring bias continues in an upward trend (does being last or near last in a long field give even more of a boost?) or if there’s a bell curve trend (do those in the middle half of the group get the benefit, with those near the end losing out like those near the beginning do?).
Posted by Northwest LeatherSIR 2012 at 11:36 PM 0 comments

Photos from the Contest

I’m finally able to post some pics from the contest.  These photos are © 2011 Malixe Photo, used by permission.  (Thanks, Charlie, and thanks for taking great pics!)  Separate posts will have pics from the Speech and Fantasy portions of the contest.

Pussied-out the naughty bits on a pic to try and keep Google from blocking the blog.

This Thursday, Thanksgiving evening, is the latest rendition of the “Spanksgiving” fundraiser.

Spanksgiving will run from 9 pm to midnight at the Cuff Complex (1533 13th Ave. in Seattle).  Ryan and Danelle will be there to mete out spankings and flogging — pay for eating too much turkey, boy!

In addition to buying swats for yourself, you can buy them for your friends as well.  What’s that?  Your so-called friends bought you a spanking and you don’t want to submit?  Tell you what: donate an equal amount and we’ll let you off the hook.  (evil grin)

We will also be offering tickets for a prize raffle, with a number of great items available, including a women’s leather jacket, a paddle, cards featuring kinky gingerbread men, and even a fabulous pie (donated by Northwest LeatherMOM, my own mother).  Yes, it’s true: on Thanksgiving, you can’t get away from food!

Proceeds from Spanksgiving will go to support the 2013 Leather Leadership Conference, which will be held in Seattle. 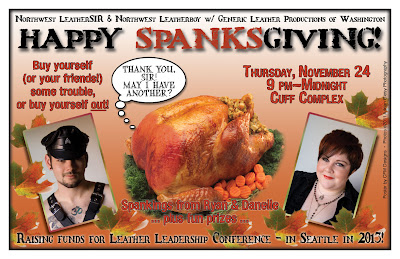 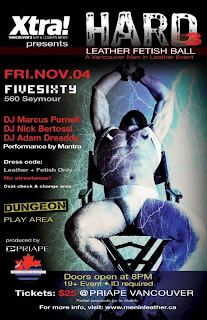 Vancouver Men in Leather had their third “HARD” party in early November.  According to guys from Vancouver, the event is half dance party and half dungeon, held at Five Sixty (560 Seymour).  I have not been able to attend the previous two because they were on Sundays, which would mean taking Monday off from work.  (For the Canadians, they were on the Sundays of three-day weekends, so not an issue for them.)

Cliff and I were in Vancouver for New Year’s Eve and had been at Five Sixty then.  That night, it was packed to the gills, including a 45 minute wait at coast check.  (And the line just got longer as midnight approached.)  Yeah: got there at 10:30, had time for one drink before midnight (with a 20+ minute wait in that line).  And then there would be the same wait to pick a coat up later.  But since this wasn’t a mixed event and wasn’t on a Saturday or a holiday, we knew that wouldn’t be the case.

Five Sixty has three levels.  The main level is a large dance floor and a stage.  Upstairs from that is a lounge area overlooking the dance floor.  Downstairs is a long, narrow space with a partition down the middle — bathrooms on one side, bar and lounge alcoves on the other, plus coat check at the far end.  For HARD, the lounge alcoves became the dungeon space, with a fuck bench and dark corner in one, a sling in the second, and a couple crosses in the third.

We got a room at the Ramada less than two blocks away (good deal at $70, too), which was convenient.  One of the members of Seattle Men in Leather had won free passes but couldn’t attend, so we got to take a couple of the tickets.  (Thanks, Paka!)  The event was scheduled to start at 8:00, but I had been told no one shows up until 10:00, so we planned to leave the hotel after 9:30.

Until Cliff decided to go on Wednesday, I had been planning to ride all the way.  The weather promised to be dry, buy pretty cold.  It would be my last long distance ride chance of the year, to be sure.  Since he was going, though, I just rode to his place in Stanwood (about an hour’s ride north of Seattle; an hour and a half when you’re talking 4 pm Friday traffic, of course).  As expected, cold ride, but standable.  (If I had ridden all the way myself, I would have stopped in Mt. Vernon anyway to warm up.)  We took his truck the rest of the way, an uneventful ride.

It turned out that our preconceptions of the event were a bit off.  As described above, there were only 3 or 4 play spaces — which would be enough, of course, if anyone actually played.  Neither of us have gone to enough “leather dance parties”, or we could have predicted that the attendance — which had a leather/fetish dress code, allegedly no street clothes allowed, although I didn’t see any enforcement of that, but neither did I see flagrant violations — would be primarily hunky muscleboys in the one harness they own (yes, I know I’m looking down my nose at the type), plus a decent dose of the regular PumpJack/VML leather crowd.  (Several of our Vancouver friends attended — Mitch and Brian, Darryl and Josh, Jacques, Ian — although several did not.)

We didn&rasuo;t realize that there was an after-party scheduled for Steamworks, or we might have gone.  Heck, almost certainly would have bugged out of HARD around midnight and gone to get some harder play in.

As Northwest LeatherSIR, British Columbia is no longer in my “region” (it is part of the Western Canada region), so although I wore my title vest, I wasn’t there in any official capacity.  I likely would have gone up even without the title, but that certainly gave the added incentive.  I’m not sure how many guys saw the vest or identified the title, though, since no one commented on it.  Vancouver has struggled to have any leather title consistency for the past decade and more, so I’m not sure how much cognizance most of the locals (stand-and-model or otherwise) have of leather titles, whether it was just a fancy patch to them.

Still, I’ll keep my eye out for HARD 4.  The difference between Friday and Sunday might change the makeup of things, and might change the desire to play (last chance for the weekend, you know).  Warmer weather in the spring and summer might make it better, too.  (As would me knowing what to expect, of course.)

On Friday, November 11 (tonight!), I will be presenting the Seattle Men in Leather Tribal Instinct session, entitled:

“A Loaf of Bread, A Bug of Wine, A Klondike Bar… and Thou”
A Foodplay Workshop
This will take place at the Center for Sex Positive Culture (in the Annex), and it is a men-only event.  (Sorry, ladies, that’s how Tribal Instinct is designed.  The workshop content isn’t necessarily men only, and most of it would be appropriate to all genders.  If it goes well, I would be happy to present it again for a mixed crowd.)

For those of you who cannot be there, you can access a slideshow of my notes here: