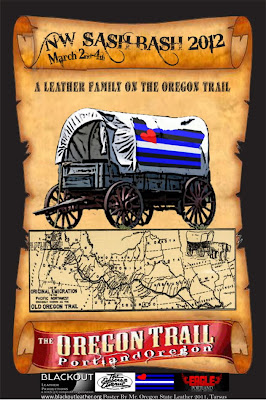 The first weekend in March, Northwest Community Bootblack Ruin, Seattle Leather Daddy Ryan, and past Seattle Daddy’s Boy Jean drove down to Portland for Northwest Sash Bash.  This was the eighth year for the event, started in 2005 by Andy Mangels and Darklady during their year as Mr. and Ms. Oregon State Leather.  I have attended each year.

Northwest Sash Bash was created a a no-contest event weekend, aimed at getting leather titleholders from around the country to come to the Northwest and have a leather weekend where they have no duties, whether they can relax with their peers, and where they and the local community can actually interact.

For a few years, the event was traded back and forth between Portland and Seattle (to both share the wealth and to avoid burnout), but last year, Blackout Leather Productions took it back for the long term.

Between being a current regional titleholder, having been to all the past Sash Bash weekends, and having been involved with organizing the event in years past, I did my best to wrangle the Seattle and Vancouver titleholders into coming.  Washington State Ms. Leather Miss Kat and Mr. West Coast Rubber Reid were out of town, Seattle Daddy’s Boy Damien had just returned from or was just about to leave on a trip, Seattle Grand Dad Jeff was unable to get away from work, and Northwest Leatherboy Danny had recently resigned from the title.  So it was Ruin, Ryan, myself, and Washington State Mr. Leather James able to attend, plus Oregon titleholders.  American Leatherwoman Trinity was listed as attending, but I did not meet her.

We had a lengthy back-and-forth in terms of room shares and hotel room, but that all got settled with Jean and Ruin being housed with Portland folks and Ryan and I sharing a hotel room near the airport.  I also rented a car to take Ruin, Ryan, and Jean down (James come down by himself), because my own is in need of cooling system repairs.

Jean met me at light rail and we went down to the airport to pick up the car, then headed downtown where Ruin was meeting us after catching the bus.  I was also picking up the title sash from Gene to transport to our new Northwest Leatherboy, Dan.  Then we headed to the Cuff Complex and Doghouse Leathers , where I had to drop CDs off for Keith to use at Cuff Country that weekend and to pick up Ryan and Dan’s title vest.  And then, because you always forget something, we had to go back to my house (which was south, at least) to pick up stuff for the fantasy on Saturday night.

After that, it was simply a miserable slog until we were through Tacoma.  I had targeted picking Ryan up at 3 pm to be in Portland at 6 pm.  It was about 3:45 by the time we left my house, and then rain an traffic took us an hour longer than usual to get south of Tacoma; we should have been there about 4 and it was after 5 instead.  And thus the goal of getting to the Leather and Cigar Social at the Eagle Portland shifted from 7:30 to closing in on 9:00.  Ruin didn’t get to where she was staying until after the social, when Oregon Bootblack Nick gave her a ride (since he lived nearby).

Saturday: Your Mouth Would Look Good with Duct Tape Covering It

After that, we went to Embers Avenue where Karen Yew did two workshops: one on basic rope bondage and one on duct tape fist mitts and hoods.  The first one was okay — a little new stuff for me, but not much — but I really liked the second one.  I hope to make use of the technique at a play party this coming weekend, and again two weeks after that at Rubbout.

After the workshops, Oregon State Ms. Leather Miss Tracey took about eight of us on a walk down to the Portland Saturday Market, a weekly outdoor market of vending booths.  Dan and I bought catnip toys for our cats, Ruin and I caught our dinners there, and a bunch of us bought fancy cupcakes to eat later.  On the way back to Embers, we walked past Voodoo Doughnuts, only to find a line out the door and down the block.

Ryan was already back at the hotel when I got there (he and James had gone in search of military surplus stuff after the first workshop).  A quick shower and change and we back on the road.  We stopped at a store midway back to Embers for coffee and Klondike Bars (because I was going to redo my stage fantasy from the contest as part of the evening’s show).  The rest of the jaunt to Embers should have taken maybe 15 minutes and took double that; due to something going on at the Rose Quarter and an accident on the freeway, traffic was a nightmare.  We planned to be there at 6:50, got there at 7:10.  Ugh.

The Black Show and Live Auction — referred to as an “erotica show” in years past — went ahead at a decent clip.  Attendance was lower than it has been, and the show was heavy on drag acts (which may be good, but aren’t stage fantasies and other hot stuff!); again, I think there’s advertising improvement focus that could be done.  The Klondike Bar fantasy went off well (and messy), and the addition of chocolate syrup pushed the edgy nature a level further.

(I haven’t yet posted the pics from the contest fantasy, have I?  Will solve that soon.)

Among the auction items was an original framed drawing by Oregon State Mr. Leather Tarsus.  Cliff had bought one of his pieces a couple years ago, and his figure work has improved since then.  Dan wasn’t especially happy that I bought it, because he was bidding on it, too.  Sorry again, boy!

After the show, Ryan, Ruin, and I went to the Sindicate space to check out the play party.  As expected, it was mostly women and pan (kinky het) play, not much to interest me.  So I left them there and headed to the hotel for a costume change, then came back to pick them up.  They had got in some bondage and flogging play while I was gone.

We dropped Ruin off at her hosts’ house and then Ryan and I headed to the Eagle for a bit.  We left there and went back to the hotel, and then I came back into town to check out Hawk’s PDX, the new sex club.  (Dan had won a couple passes in the raffle at the show and passed them to me.)  I’ve been to the Hawk’s Gym in Las Vegas, so I was interested in checking this out.  Low population that night (at least by when I got there) and more brightly lit than just about any sex club I’ve been to, but I did play with one guy and was able to leave satisfied.  Also got to talk to Andy Mangels, who was working the desk that night.

Sunday morning saw a leather potluck brunch at the home of the leather couple Ruin was staying at.  In many ways, this was the best part of the weekend: good food, good conversation, etc.  Brent from the Sash Bash committee took the chance to chat with us about what had gone well or less well during the weekend, to help with planning for next year.

Ryan, Jean, and I headed out to the car, and then waited for Ruin to say her goodbyes.  And waited and waited.  (Okay, maybe 5 minutes, not that long.)  Finally, we each sent her a text at the same time.  We also joked about taking pics of her making faces at icky comments I made during the weekend, and packaging them into a calendar.  (Favorite phrases of the weekend: “execratory functions” and [artificially low voice] “larger than average manhood”.)

Driving back north was far more enjoyable than the trip south had been on Friday – nice weather and not even the standard slow down in Centralia.  Ruin had a question, though.  (It’s her standard line, “I have a question!”)  For the first 100 miles (roughly Portland to Olympia), we went through an entire workshop on butt sex and how to make it easier and more pleasurable: me driving, Ruin in the back seat with questions, Ryan and Jean piping in as needed.  We covered lube and stretching and relaxing and toys and douching (Ruin makes a face here) and even the edge of fisting.  She was tickled by the whole thing and said she’s going to see about having me do a butt sex workshop for Seattle girls of Leather: “Help me, Obi-Jim!  You’re my last hope!”

(Yes, it sounds bizarre to me as well.)

Favorite comment of the trip back, noting how it it sometimes difficult to remove a cock from the ass after butt fucking, I said that was because the cock likes it there, it’s found a new home and wants to stay.  “Are you saying my Sir’s dick is a hermit crab?”  “Yes, and that makes your ass the discarded shell.”  <insert facial expression from Ruin here>