Back in the late 1990s, when I lived in San Mateo, CA, I started reaching out to have more than the haphazard leather community I had as a commuter into San Francisco (30 minutes each way).  There was no leather community in San Mateo county, so I ventured across the Bay to Hayward, where the Alameda County Leather Corps was based.

When I saw the call for contestants for this year’s ACLC contest earlier this year, I sent them an e-mail and offered to come down to be a judge for the contest.  My membership class included Andrew “Bootdog” Johnson (International Mr. Bootblack 2008) and Joan Norry (American Leatherwoman 2008), so there’s certainly something to be said for ACLC in the late 90s; I’m hoping to make it the latest big title for the class and the club.

As with IMsL in March/April, I flew down on Thursday and stayed until Monday, to work from the San Francisco office (and get reimbursement for some of the costs for the weekend).  With the contest in the East Bay (Hayward for the Meet & Greet, Oakland for the contest), I looked to stay in Oakland and checked out places close to both BART and walking distance to the contest site, ending up at the Washington Inn, right across from the Oakland Convention Center at about $90 pert night (including tax); easily $30 or more cheaper than staying in San Francisco would have been.

I took BART to Hayward and walked the few blocks to the World Famous Turf Club.  The Turf Club has changed locations in the past decade and Hayward has grown up so much in that part of town that I recognized nothing.  The Meet & Greet included dinner (salad, steak, potato, strawberry pie).  After introductions of the contestants (Christy Ford and Jay Williams) and the judges (myself, American Leatherwoman 2011 Trinity, Ms. World Leather 2001 Annie Romano, Ms. San Francisco Leather 2012 Miss Bethie Bee, and the first Mr. Alameda County Leather 1992(?) Mark McKee) and staff (tallymaster Mark Ingham, judges boy American Leatherboy 2011 Tyler Fong), we went upstairs for the judging.

Keeping with the sexplay focus of the LeatherSIR title, and having recently been the gay presenter at a pansexual leather conference, my first question was what they would teach at such a conference.  This was intended to make them think mostly about what they feel they are knowledgeable enough to teach, plus to put in play that potential unknown factor of teaching to a kinky straight audience.  The second question was what BDSM activities they did that would be “scary” enough to do at a perceived high-end queer play party, given that some people are reluctant to attend such because they don’t feel “scary” enough.

Saturday night, the walk to the contest venue (Humanist Hall) turned out to be longer than I expected, so I had to catch a taxi to be there in time… to hang around and wait.  After about an hour, the judges and some of the staff headed out to dinner at an Italian restaurant called Milano.  Once back at the venue, the contest flowed pretty well, although with only two contestants, there was an added break needed for a costume change.

There was also a decent sized silent auction.  San Francisco Leather Daddy 2009 Gauge Strongarm and I kept outbidding each other on a motorcycle jacket and riding gloves.  We eventually talked during a break and realized that he was more after the jacket and I was more after the gloves, so we made a deal to stop outbidding each other and split the win ($50 for the jacket, $30 for the gloves — Harley Davidson riding gloves with zip-off cuffs (can’t find an image online) for varying times of year).

The contest proceeded just fine.  The standout piece was Jay WIlliams’ fantasy, where a puppy with a cigar in his mouth led onto the stage trailing chains, followed by Jay in a major genderfuck leather outfit that looked like it was snatched from (leather Empress) Snatch’s closet: corset, long leather skirt open at the front, high heels (putting him at like 7'2"), and a high collar piece.  He lit the pup’s cigar, then took it for himself.  Very hot, and borderline disturbing. 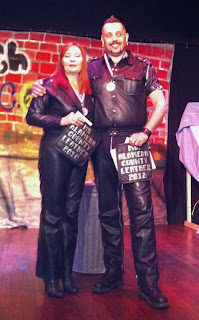 Fuck yes, I got some.

Friday afternoon, I played with a 24 year-old Australian surfer boy with small hands and a nice sized cock, which both fit quite nicely at the same time.  (A first for him.)

Friday night was a bust in two directions.  Foremost was the guy Alan I connected with off AssPig.  He talked a good story but when we got back to his place, he was incredibly scattered and unable to focus on actually getting down to play, so I eventually had him take me back to my hotel.  In the process, I had to turn down Bob, who has wanted to play with me for a while, and that offended him a bit.

I’m sorry we didn’t get to play, but don’t go calling me a flake for standing you up.  An exchange of a few messages on Bear411 two months before the trip (and none since, and no other direct contact info for in between) where we say that yes, playing during the weekend would be a good thing does not constitute a date.  If we had set a specific night of the weekend, maybe — I was there for four nights, even if you were only available for one — but we didn’t set things that well.  Sorry, but I was neither an ass nor a flake.

Saturday afternoon, I ventured into San Francisco to play with Philippe, a furry bear from Paris.  We only had about 90 minutes to play before I had to head back to Oakland and him to the airport, but that bear had a hungry hole, eating up hands and cock.

After the contest, I had hoped to get into the City for the FistCity party, but by the time I walked back to the hotel and got ready, it was 11 pm.  Fortunately, I had a backup option: Sergio and José, whom I had played with back in March.  This time, I brought my own lube, remembering their penchant for using water-based hot lube(!).  I still didn’t take Sergio’s fucking huge hand, but José set a new depth record and made it past the second sphincter!  I slept at their place until about 7 am, when I could catch MUNI and BART back to Oakland, where I caught another 3 hours sleep and then had a mediocre dim sum buffet brunch.

Played out, I made it back to the hotel and collapsed into bed.  Worked the next day from the San Francisco office and made it home (with no plane delay this time)!