Next Time, Take the Train

As part of going to San Francisco for the International LeatherSIR contest, I decided to travel by train rather than plane.  I have been to so many events where I have jetted in right before and jetted back out right after, without a chance to have an “experience” — or where the plane flight itself was an “experience”, in all the bad senses of the word — that I decided to swap things up for this one.

In the past few years, I have made a couple trips to Portland and back on the train (about 4 hours each way) and one trip in Ireland from Killarney all the way to Dublin (about 7 hours, I think), but the last long train trip I took was way back in 1991, San Jose to Portland for Westercon (although looking at the Westercon history page, that con is listed as July 1990, before I moved to California, and the next one was in 1995, after I got out of the con circuit [I think], so I’m confused), and before that I was maybe 10 years old, travelling the coast with my mother and sister to visit grandparents in southern California.

I had to be in San Francisco for a contestants meeting at 2:30 pm.  The train was scheduled to arrive in Oakland at 8:45 am, making it a perfectly good arrival time.  If I were to fly to the Bay Area to arrive by 10 am (to get to the hotel by noon), I would be leaving on an 8 am flight and thus getting up at 5:30 am to get to the airport in time.  Ugh.  Departure on the train from Seattle, though: a desirable 9:45 am the previous day.

That’s right, a 23-hour trip each way.  To many, that would be a killer, vs.  the two hours of flight (okay, 4 hours when you count getting to the airport).  But for an “experience” trip, that mostly meant taking two more days of vacation.  It also meant that all my packing and prep for the contest had to be complete 24 hours sooner, leaving me to just sit back and relax for the journey (in theory; or fret and worry).  And coming back, I would have a full day of “end of event” decompression without needing to jump right back into work the day after the huge emotional weekend.

For those who haven’t priced train prices, cost of travel was comparable to flying.  Base price was about $315 round trip, and I got a 10% discount for having AAA, bringing it to $286.  And that includes up to three 50-pound bags with no fee.  Since I was going to a leather contest and needed roughly 85 thousand pounds of leather and boots (okay, two suitcases over 45 pounds each), that would run me anywhere from $40 to over $100 each way, depending on the airline (Southwest excepted), making the train that much better of a deal.

So how did it go?

Ruby picked me up at 8:30 in the morning to get me to the train.  President Obama was still in town, so we had some adventures getting me to the train station, dodging what traffic we could and eventually having me walk a block at the end.

First perk of the train vs.  the plane: no TSA.  They weighed my bags, but there was no nasty long line for security, no “take out everything from your pockets and stand like you are being robbed”, no 3 ounce limit on toiletries — no security checkpoint at all, in fact.

Waiting for boarding, I observed the other travelers.  Not much of a difference from airport passengers.  So who does take the train?  Some of the people were just going to Portland (or even closer destinations), but others were families travelling on vacation.  (I later found that kids under 12 get 50% off on the fare when travelling with an adult.) Others I can imagine travelling by train are those who can’t fly (fear, air pressure, claustrophobia, or even legal restrictions).  And as noted, the greater flexibility with luggage is an attractant. 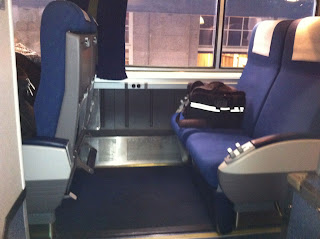 On board, next perks of the train: seats are wider than on a plane.  Two or even three time the legroom.  Decent amount of recline.  Tray tables that you can use a laptop on even if the person in front of you is reclined.  Footrests.  Leg rests which sort of make the seat into a bed.  Electric plugs (two of them) at each row.  Huge windows.  Who else takes the train?  People who want more comfort than planes provide.

And getting on in Seattle, almost everyone could have a window seat, with no one in the aisle seat next to them.  In Tacoma, I got a seat mate, who got off in Portland, but I then got another one for the rest of the trip.  This wasn’t too bad, given the size of the seating area.  I could even get past him to the aisle without waking him up in the middle of the night, there was that much leg room.

(On the trip back, when announcing seating in the dining car, they repeatedly referenced the train being “completely full”.  I guess this referred to the sleeper cars, since nearly everyone in coach had a double to themselves.  Quite a change from the airplane use of the term!)

The train has both a sit-down restaurant (with “community” seating; you don’t get a table to yourself) and a café/snack bar.  I knew I was in kind of a captive state, so I had brought some snacks, but I decided to do the “experience” thing and had dinner in the restaurant — half a chicken, potatoes, veggies, for something like $12, not unreasonable at a regular restaurant.  The two guys I ate with were friendly, and when I mentioned writing blog posts on the trip, I ended up explaining some details about the contest weekend.  One had known a Mr. Las Vegas Leather at some point, so it wasn’t totally foreign to them.

Sunset came around Klamath Falls, near the Oregon border.  Southern Oregon had some great vistas, mountains and valleys with thick forests.

Much of the day and evening, I spent writing title blog posts, finally getting a few last things posted that I wanted to get out of my system, whether the judges got to read them or not.  I will have to go back to touch up formatting and add links later, since my editing capabilities on the iPad aren’t as easy as on a laptop (although I could do what I need there, I just decided to get more content instead of detailing done).

I also watched a few hours of TV on the iPad — episodes of Misfits, Smash, and Young Justice that I have had on hand for a while, not yet watched.  I brought some 18 hours of shows with me that way.  Almost all my TV watching is on the iPad these days, buying the shows I am interested in from iTunes and watching them when and where I want.

Sleep on Wednesday night was one of the big downsides to the trip.  The seats don’t recline quite enough to bed down in.  The train brings pillows by, but not blankets, so I used my coat as a cover.  I ended up in a fetal position and it kinked my lower back, which is always problematic on event trips for me anyway.  So I got a few hours of sleep, maybe 5 or 6, and not great sleep.  I had meant to bring a neck pillow but forgot about a light blanket.

The other downside was WiFi.  The Amtrak site indicated that the train has WiFi, and it does.  For those who have a sleeper car (which was a few hundred dollars more), WiFi is included (as are movies, meals, and so on).  For those in coach?  Nope.  Can’t even buy it for $10 or $15 for the trip.  WTF?  There’s an income stream being missed there, Amtrak!  (I checked their website and after going as couple levels deep, found that the info was there.  This is the only WiFi-enabled route with that restriction!)

Come morning, we got into Sacramento about 30 minutes early, so we waited there for a while, and eventually got into Oakland on time.  Amtrak used to have a reputation for huge delays — as much as 36 hours on cross-country trips, I’m told — but that wasn’t an issue here, fortunately.

I hadn’t read the schedules well enough to see that there was a BART connection from the Richmond stop and a bus connection to San Francisco from Emeryville or I would have travelled to one of those rather than schlepping my luggage 1/2 mile from the Oakland station to BART.  Live and learn, I’ve done those treks before and will again.

The return train was scheduled for 9:45 pm, allowing me to sleep in, have breakfast with Dan, pack, check my bags at the hotel, and spend the afternoon cruising and shopping in the Castro.  Fruitless cruising, alas!  Bored, I headed back to the hotel early, had dinner and coffee, and then caught a cab to Civic Center BART and made my way back to the Amtrak station, getting there an hour early.

This time, I had a double seat to myself.  Seattle passengers were all put in the last car.  With two seats to bed down in, sleep was much better (although I’m sure looking forward to my bed tonight and the chiropractor tomorrow!).  The train seemed to be wobbling a lot more going north, but that may be more pronounced away from the stabler middle of the train.

The last car also seemed to be much louder, squeaks and grinding noises.  I had noticed that the trip down was way quieter than plane travel, but coming back wasn’t as nice in that arena (although still pretty good overall).

Dawn came around Dunsmuir, south of the Oregon border, but I dozed for another hour or so until they announced seatings for breakfast in the dining car.  For breakfast, I again went to the dining car and ordered the Continental Breakfast: $8 for oatmeal, croissant, half a grapefruit, three big strawberries, half an orange, yogurt, orange juice, and two cups of coffee.  Total score on value for the dollar there!  I at breakfast with Will and his two young sons who were visiting from England (based on their accent), taking the train up to Canada as part of their big trip.

Although I’m still writing blog posts and reading and watching TV shows — Falling Skies, Awake, Grimm, Young Justice, and Planet Earth — I’m paying more attention to the scenery going north.  Beautiful weather, nice and calm, and a hint into what I’ll see when I ride the scooter to target="_blank">Folsom Street Fair in September.  Except for the twinges in my back — some from sleeping on the train, some from just forced posture during the contest weekend — just about exactly the sort of thing I was wanting.

Unknown how much time they made up over night.  Schedule says we are supposed to be in Eugene at 12:44 and it’s 12:39 as I wrote this, well south of there, so we were obviously still behind, I’m thinking by about 90 minutes, maybe two hours (ended up being one hour late).  Assuming the timing is viable, I will take the bus home from the station.