When I tell people I ride a “scooter”, they usually think of this: 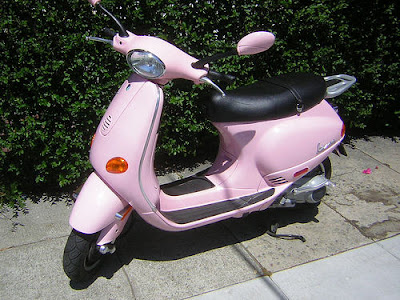 When what I ride is this: 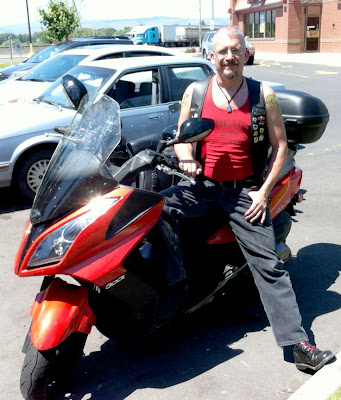 Not quite the same thing, eh?

A “scooter” is simply another form of a motorcycle, not particularly any more different from a standard cruiser style than a “lean forward” crotch rocket sport bike is.  Scooters are usually on the lower end of the power spectrum — the smaller ones are intended for in-city commutes, mostly — and they have a floorboard, so you usually sit upright.  Most scooters are also automatic transmission, and they usually have under-seat storage.

Mine is a Kymco Downtown 300i — at 300 cc, one of the more powerful scooters.  (Kymco is a Taiwanese company.  They also make engine parts for Vespa and BMW.) I have had this one for a little over a year (since April 2011), replacing my previous Kymco People S 125 which I had ridden for the previous 3 years.  When I upgraded to the Downtown, I stuck with a brand I knew and trusted.

When people hear that I ride a “scooter”, they picture me putt-putting along at 25 mph on city streets, doing short trips of a couple miles max.

In 15 months, I have put just short of 10,000 miles on my Downtown, with over 15,000 miles on the People S before it.  It is my primary commute vehicle — my only vehicle until the car gets some cooling system repairs — 5 miles each way including segments on the freeway, in traffic.  I ride year round, in everything from sun to pouring rain; only the threat of snow keeps me off it.

(Oh, and thunderstorms.  Lightning and motorcycles don’t seem to be a smart mix.  We usually have none of these a year in Seattle, but the morning after I wrote this post, we had our fourth one in two weeks.  And I delayed going into work until it passed.)

I have ridden my Downtown on hours-long trips to Portland, Vancouver, and Richland — the last being 4 hours each way with a rest break (which is where that pic was taken), including a mountain pass — at highway speeds, topping it out at 90 mph.  (Shh, don’t tell the cops.)  With the trunk, the space under the seat, and a bag strapped behind me, I can carry enough luggage (including my leathers) for a long weekend trip.  I can also carry my inflatable kayak (uninflated, of course) on it.  Or a dog cage suitable for puppy play. 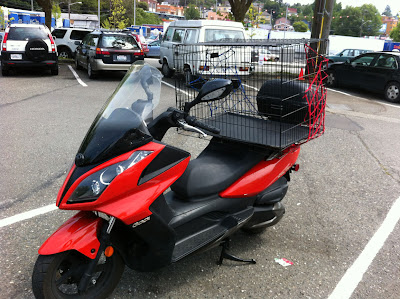 I get as high at 74 mpg in cool weather.  I can almost always find a parking space, and parking in the downtown garages is just $5 for the day, usually with a space for me on the first level of the garage.  And insurance is $100 for the entire year.

So please feel free to sneer a little when you hear I ride a “scooter”.  I’ll do the same when I hear you complain about gas and parking and insurance prices for your car, or when I see you get your own motorcycle out only on the sunny days in Seattle (all 14 of them each year).  Even a “scooter” motorcycle beats one that doesn’t get ridden or one that doesn’t even exist.